Apps have grown in popularity due to their usefulness and accessibility. However, with so many app developers out there, it can be hard to determine which type of development is best for you. In this article we will explore and compare the three major categories of app development: no-code vs low-code vs full code.

No-code is the easiest type of app development because it requires no programming experience whatsoever and can be done without any coding skills at all.

The low-code category falls in between no-code and full code as it does not require the same amount of coding that full code does, but still needs to be programmed. Low-code may or may not require writing code at all.

Finally, full code is the most advanced form of app development and requires a high level of coding skills.

This article will explore in detail each different software development approach and how to determine which approach is best for your project.

What are the three types of app development?

There are three main types of app development: no-code, low-code, and full code.

No-code is the easiest type of app development in that it requires no programming experience whatsoever and can be done without any coding skills at all. With no-code, you can create an app by using a visual interface to create your app.

No-code development platforms use visual, drag-and-drop features to enable users to create applications without manually writing code. The apps are still compiled into code, however it is the platform itself that generates the code for the final product.

Low-code falls in between no-code and full code as it does not require the same amount of coding that full code does but still needs to be programmed. Low-code apps can be created by people with little or no programming experience.

Low-code may also refer to an app built using a no-code or low-code development platform but with code added to supplement the platform. For example, many platforms provide capabilities to add raw HTML, CSS, or JavaScript on the frontend to add special functionality or visualizations.

Another example is the concept of backend as a service (or mobile backend as a service, aka MBaaS). MBaaS is a no-code or low-code solution where the majority of an application’s backend, if not the entire backend, is built and maintained using a codeless platform. The frontend can then be built using code or a different low-code or no-code platform.

It is becoming increasingly common for experienced software developers to utilize no-code and low-code tools to expedite development. Low-code development platforms are more capable of interacting with coded elements than no-code platforms, making them far more appealing to experienced coders.

For professional developers, low-code platforms can enable rapid application development while still providing the short-term and long-term flexibility that they desire. For business users, no-code solutions may be more appropriate as they can be quickly built to create business apps that can then be fleshed out by internal development teams.

Full code, often referred to as traditional application development, is the most advanced type of app development and requires a high level of coding skills. Full code apps are created by developers who have knowledge of traditional programming languages.

Experienced developers with significant technical expertise may be able to produce fully coded apps very quickly, but this comes after many years of developing coding knowledge and practice. 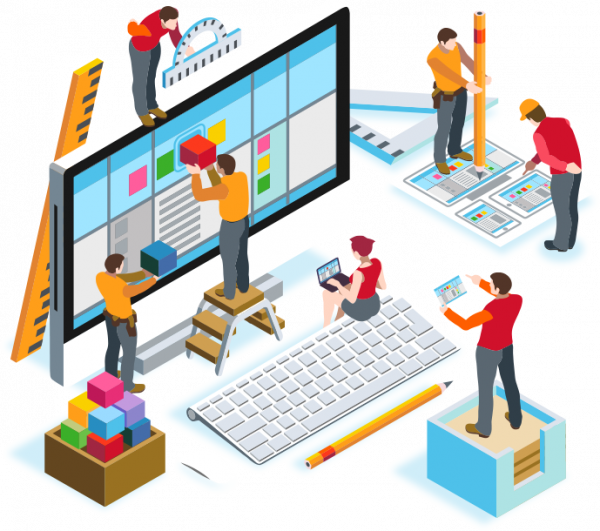 What is no-code application development and how does it work?

No-code app development, sometimes referred to as codeless or visual development, is the easiest and quickest way to create an app. It does not require any programming experience or skills and can be done without any coding at all.

No-code apps are created using a visual builder, which is a platform that allows you to create your app without any coding. Visual builders typically provide reusable components that can be lightly customized, allowing the builder to create a custom user interface and user experience.

Note: It’s important to note the difference between coding and programming. Both Coding and Programming refer to the process of transforming a business process or app requirements into a format that can be understood by computers.

The former uses a programming language where a developer writes code. The latter may mean the same as Coding, but in the context of no-code tools, would also mean using graphical interfaces to accomplish tasks and implement logic.

Check out our Codeless Programming Fundamentals course to learn more.

What are citizen developers?

As the definition above states, citizen developers are typically business users that utilize low-code/nocode platforms and tools to create business apps, usually to improve or automate business processes. Citizen developers are usually not professional developers, but instead are non-technical users that take advantage of the capabilities of no-code and low-code development tools to create relatively simple solutions.

The growth of no-code and no-code development is enabling citizen developers to expedite the digital transformation of many businesses around the world. Employees are no longer beholden to IT departments to create apps and tools to make their jobs more efficient.

The drag-and-drop capabilities of no-code and low-code tools make it far easier for non-professional developers to create apps to meet business needs. These visual tools not only allow non-technical developers to developer solutions and create their own apps, they also take a large burden off of internal development teams that are already facing large workloads due to companies’ technology needs.

What is low-code application development and how does it work?

Low-code app development is the process of creating an app using a visual interface as well as code. With low-code, you don’t need to have any coding experience to create an app, but you will still need to know how to code in order to add additional features and functionality.

Increasingly, we are seeing low-code become a tool for coders to build faster, using low-code or no-code tools for features – or even the entire frontend or backend – that would take much longer to build with code. In other words, low-code platforms are not simply for non-technical users, but can be valuable tools in the arsenal of professional developers.

Deciding between low-code and no-code solutions for your project can be tricky. Ultimately, the decision will come down to two things:

While low-code enables you to fill gaps in the platform with custom code, you may find that there is a no-code or low-code tool that already offers all of the functionality you need. The landscape of tools is vast, and when you add integrations engines like Zapier and Integromat, the ability to stitch together multiple tools to achieve your goals is increasingly realistic. 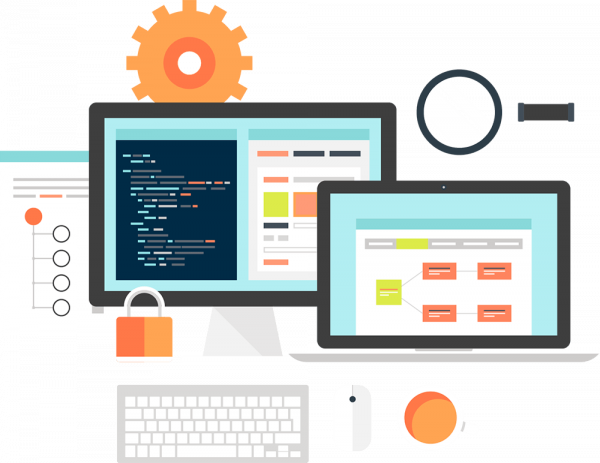 What is full code application development and how does it work?

Full code app development, commonly referred to as traditional development, is the most advanced type of app development. It requires a high level of coding skills and is typically done by developers who know several different coding languages.

Full code apps might be created with a combination of programming languages, such as HTML, CSS and JavaScript. Full code is the most advanced form of app development because it requires a high level of coding skills and knowledge. It takes more time to create a full code app as compared to low-code and no-code, but it is traditionally much more versatile and allows for added functionality.

Full code can be beneficial for alleviating security concerns related to vendor lock-in and reliance on third-party systems. On the other hand, you then need to bring security in-house, creating additional costs and a need for additional internal skillsets.

As for the cost impact, you can read our full breakdown of the cost of application development here.

What is an IDE?

IDEs color-code portions of code to help the developer keep track of code blocks and tags, whereas low-code and no-code platforms handle these items automatically.

How do you choose the right type of app development for your needs?

When determining the type of app development you need, it is important to consider your requirements, timeline, and skill set. For our discussion, let’s assume we are wanting to build business apps to manage or automate a business process.

No-code apps can be created quickly by anyone with little or no coding experience, but may have limitations on the functionality possible. For example, no-code business apps may not be able to easily integrate data from external databases, or may not be able to process data as quickly due to platform limitations.

Low-code apps are likely to be more capable than purely no-code apps. Low-code business apps can more easily handle data integration with legacy systems because custom code can be added to bridge any gaps between the low-code platform and external software applications.

Typically, both no-code and low-code platforms will provide integration capabilities to enable interaction with web services or other business applications.

Full code apps require a high level of programming knowledge and skills, but offer virtually limitless capabilities. Full code capabilities depend highly on the programming language used, but full code is also much easier to combine multiple languages together to achieve desired results.

Often, with full code, the primary limitation is the coding expertise of the development teams involved.

No-Code vs. Low-Code vs. Full Code 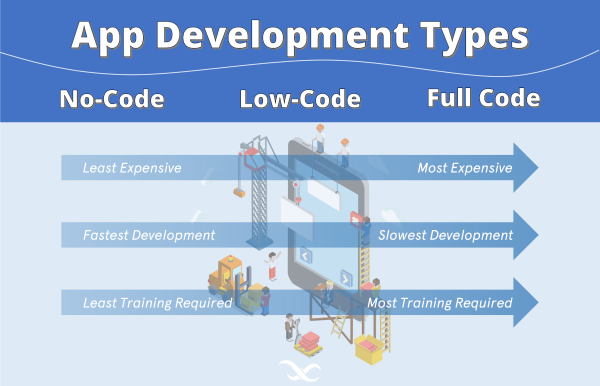 Ultimately, the right development type for your project is likely to be the one your team already knows best. All things being equal, however, this is what each development type is best suited for:

The three types of app development are no-code, low-code and full code. No-code is the fastest and easiest type of app to make, but also tend to have the most functional limitations.

Low-code falls in between the other two categories because it does not require nearly as many coding skills, but some knowledge is required to get the full benefit. Low-code is typically faster and cheaper than full code, but still less so than no-code.

Full code apps are typically created by developers who have high level coding skills, which means they will take more time to create a presentable product than other form of app development. As a result, full code tends to be the most expensive approach.

It’s important you consider your requirements when choosing an appropriate development approach for your needs so that you can find one that suits your skill set and needs best.

If you’re looking to get your app built for you, be sure to check out Backendless Partners and Backendless Consulting, two great options for getting your no-code, low-code, or fully coded app built fast and affordably.

Backendless is the perfect mix of code and no-code. No matter your programming skill level, Backendless has the tools for you.

What is the difference between low-code and no-code?

Is low-code/no-code the future?

It is one of the future possibilities (and an extremely promising one at that). However, that does not mean that there will no longer be a market for full code, as full code development is necessary for building and maintaining no-code and low-code development platforms.

Additionally, no-code and low-code development is necessarily limited to the capabilities of the platform. Most innovative technologies still require coders to implement.

Is there a job market for no-code and low-code developers?

Scaling Your Application: A Beginner's Guide
Scaling is essential for any application to serve its users effectively as it grows. With this guide, you can ensure that your app is prepared to handle increased traffic and usage, no matter how big your user base becomes.
Read More
The Importance of Speeding Up Time to Market for Applications
The importance of time to market cannot be overstated, as a delay in release can lead to missed revenue opportunities, lost market share, and decreased customer satisfaction.
Read More
Simplifying the App Development Process: Best Practices
Application development can be a complex and time-consuming process, but it doesn't have to be. These best practices can streamline your development process today.
Read More